In late September of 2018, I was asked to create a mural in the motorclothes department of Latus Motors Harley-Davidson and Triumph dealership in Gladstone, Oregon. Their new motorclothes manager was renovating the department to attract new customers and expand their offering to a younger market. “Anything you want, just something with color” was my direction.  Being somewhat new to the Harley market myself, I enjoyed taking on this challenge, as I learned more about the Harley lifestyle, the audience that is just now being introduced to Harley, the history of the brand, and how it all inter-related.

Currently, Harley is heavily into the dirt tracking scene, sponsoring bikes in the Super Hooligan series and also the professional series. Throughout Harley’s history, the chopper has been a favorite with both young and old riders. One of the current paint jobs on a 2018 Sportster is a retro stripe. To connect myself with the piece, I went back to memories as a kid in the ’70s and seeing all of the Rat Fink stickers and shirts my brothers owned and wore with pride. 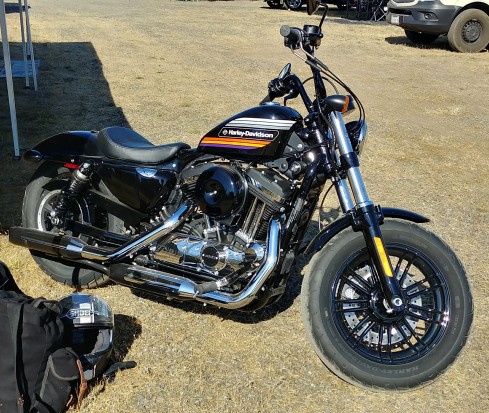 The bonus challenge for me was that this was my first mural. At the tallest side, the wall measures 7 feet tall and is 15 feet wide, not including the adjacent wall. I wasn’t sure how to actually get my drawing onto the wall. I also wasn’t sure how the existing customers and the sales staff (that would have to look at this day in and day out) would react. It was important to me to make a good impression.

I started on a Monday, which is good in a way because Monday’s are usually slow at the shop, so I wouldn’t have to worry about being in the way of many customers. But that also meant that I would have an audience of sales staff watching me up on a scissor lift all day. A few kind gents helped get the scissor lift in place and showed me how to operate it, then left me to my business. I was sweating bullets as I still wasn’t sure how I was going to get the image on the wall and in the correct perspective and proportion. I started with the grid system, working it all out mathematically. I soon found myself zeroed in on each individual square, overthinking every stroke.

I stopped for lunch, called the motorclothes manager, and almost gave up. I was panicked. Somehow, she talked me off the ledge. After lunch, I felt better and gave it another try – this time free-handing it, and just going for it, making big broad strokes and finding a rhythm in the process.

Throughout the day people would come over to watch or ask questions or tell about their experience with art and painting. I knew I was on to something when I heard a voice behind me say “that resembles my tattoo!” I was shown a Rat Fink tattoo on the parts manager’s forearm and a big smile on his face. I was relieved to find that my intentions were not only being communicated, but appreciated as well. But then I started painting.

The first color I laid down was purple. People got nervous. “Why purple?” “WTF is with the purple?” I would show them the sketch, and tell them that its only the initial color, there is much more to come. They would eye me and then walk away. I continued to paint purple on a Harley-Davidson wall, wondering what would happen when they saw the pink paint come out.

By the end of the 3rd day, I was done with the figure. As I would climb off the lift to get a better view of my work and to take a break, I would hear customers on their phones mention “Rat Fink” and “mural” to whomever they were talking to. More people had stories to share about their own artwork stories about art. They were still worried about the purple. People thought the work was done and wanted to know if they should take the lift away. But the background hadn’t even been started yet, and I had to cover the adjacent wall.

Each day after that was exponentially more exciting as the process really took off. More colors, bigger backgrounds, more motion to the piece. Progress seemed slower, though,  because there was more square footage to cover. More time was spent with one color covering more space. Every time someone asked if it was done, I’d climb back up on the lift and say “not yet”. 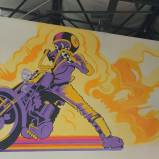 My dear friend was getting married in Hawaii, and my goal was to finish the mural before I left. However, the paint wasn’t covering as well as I’d hoped, meaning more coats were required, which slowed me down. I managed to get the mural to a good stopping point before I left.

When I returned, I added the striped to the adjacent wall, touched up areas here and there, and called it good. The mural has received great reviews from customers and staff. The owner seems to love it. The regional director even commented on it. No one is questioning the purple anymore. 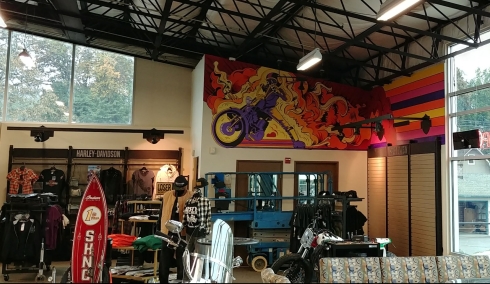 7 days later, the mural is complete. I was sore after most days from standing on my feet all day. My brain was exhausted from the mental exercise. But I was elated and still feel victorious for tackling a new and ambitious challenge.

Come by the dealership to see it in person sometime! The lighting is better now that the corner is set up again.